Jul 08, 2019
With the development of industry, the quality of soil environment is getting worse and worse, and there are many pesticides and fertilizers. Food safety has become a focus of attention around the world. The production of plant factories, because all environmental conditions are controllable, the advantages of plant factories in terms of production capacity and food safety will become more competitive and more competitive than traditional field cultivation in the future when labor costs continue to increase. The scope benefits the people. The important component of the plant factory LED lighting will also promote a new impetus for industrial development.

The origin of plant lighting in Japan was mainly the artificial light type plant production system. In the simulated environment of the workshop, the nutrient solution replaces the soil and delivers sufficient nutrients to the plants. During plant growth, temperature, humidity, and carbon dioxide concentrations are also controlled by the computer to a controlled range. 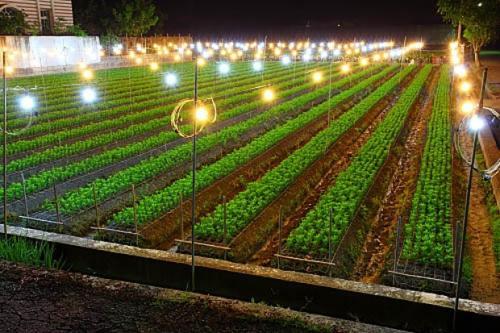 China’s plant lighting industry has been stunned. In June 2016, Zhongke Sanan Biological Plant Factory was officially put into operation, covering an area of 10,000 square meters. Until now it is still the largest plant factory in the world. As a rising star, China’s actions at plant factories are not that big. Since then, the Chinese plant lighting industry has been on the verge.

In fact, the production of plant lighting factories is the product of Moore’s Law. In the process of natural growth, plant growth has reached the best form, then growth time has become the way out for industrial development. The development of the plant market has promoted a new outlet for the lighting industry.

At present, the production of plant factories can mainly solve the food security problems around the world. All food or vegetables are produced indoors, without relying on natural light, and there is no limit to the number of plants that can be grown per square. Secondly, the production of plant lighting factories also avoids environmental pollution during plant growth and unearths healthier and more primitive plants. Finally, plant lighting has a crucial impact on human survival in some special environments. It will meet the quality of life of the extreme cold, alkali and other land environments to a certain extent.

At present, China’s plant lighting factory is developing very fast. Compared with Japan, China’s Taipei, the United States, and the European countries such as the Netherlands, the countries where the research and production practices of the property factories are relatively long, China as a rising star is truly from an industrial perspective. Do related research, and in terms of plant growth quality and breadth, China is far superior to other countries. Plant lighting factories emerge as a new industry development perspective and are currently limited by technology, cost and market. It is expected that after three or five years, the plant factory will appear like a mushroom.

Previous:Why Do You Need To Apply Carbon Dioxide Fertilizer When Planting Grapes? What Are The Planting Techniques?/Next:The Future Of Plant Lighting